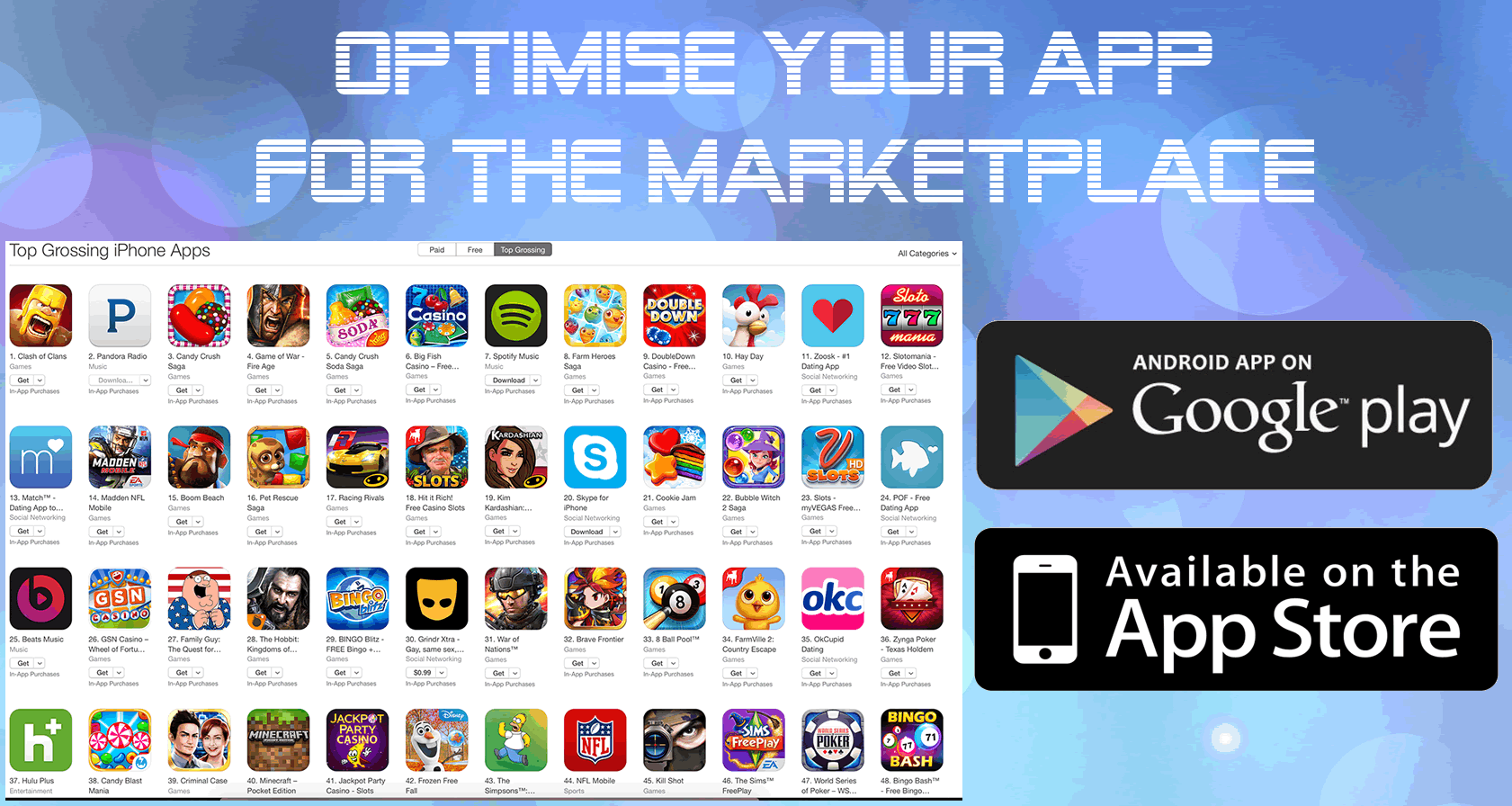 App Store Optimization or ASO is the process of improving the visibility of a mobile app in an app store for IOS, or Google Play for Android.

Similar to SEO or Search Engine Optimization for websites, ASO is for mobile apps. Specifically App Store Optimization includes the process of ranking highly in an app store search results and top charts.

And the higher an app ranks, the more downloads it gets. There are several components that contribute to and influence your apps ranking within Google Play and the App store.

The five key elements are:

Let’s talk about each of these in more detail.

The name of your app should be as descriptive as possible, while striking a balance between having a concise brandable title versus a spammy title that is completely filled with keywords. If you plan on releasing outside of your Native Country, localize the name and title of your app for each market.

If you have multiple names you think would work, and aren’t sure which one you should use, you can experiment with different app namesand see which one ranks higher and drives more downloads. For your app’s description, keep your best content above the fold.

Don’t make the reader click the read more button in order to understand to what your app is about.

And be sure to keep the description readable.Keyword research is very important to the success of your ASO efforts, so be sure to do this research and include keywords relevant to the app.

Consider including keywords used by competitors, if they are relevant to your app.

You’ll want to prioritize keywords based on their relevance to the app.

How difficult it is to rank for that keyword in the search volume.

Newer apps should target keywords that are easier to rank for, while more established apps can target keywords with higher difficulty scores. The volume and quality of ratings is a strong ranking signal for both Google Play and the App Store.

The number and velocity of downloads of your app, are likely the strongest signal to the respect of App Stores as nothing says this is a popular App, as much as getting tens or hundreds of thousands of downloads within a few days of your App being released.

An app that has a download volume that starts out high, and increases initially, and remains fairly high, will outrank similar apps that have fewer downloads,and whose download volume falls off quickly. Also, the number and quality reviews are ratings for the most recent version of the app, have a larger impact than reviews of previous versions of your app.

There are additional factors that impact your ranking. The number of people who actively engage with and keep your app installed over a long period of time, has an influence of your app’s rank.

The more your app is uninstalled, it sends a negative signal to the App’s Stores, that your app isn’t doing what people thought it would. The App icon will help your click through rate when it is displayed in search results. Don’t underestimate the importance of how good your icon looks.

Finally, social signals and backlinks are specific, more for the Google Play Store.

If your app has a lot of plus one’s on Google Plus, that sends a good signal to Google to give your app more visibility. Further, backlinks to your app on Google Play, by sites with a strong reputation will send good vibes to Google.

Each of these elements has a different impact on how well your app shows up in search results.When you get all of them right, they give your app the best chance to rank higher.